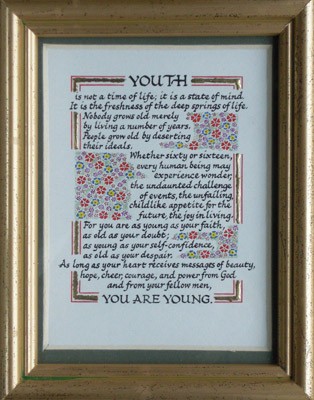 Every collection by an individual is unique, reflecting the collector’s own taste. This collection is more unusual than many in that all the paintings are miniature, and the sheer variety of subject, medium and standard reflect the diversity rather than a similarity of choice. For example, Sue Lee loved music – one of her sons is a professional pianist – and there are many portraits of famous composers by Skadi Becker.

The numerous pieces of calligraphy by George Simpson (left) reflect Sue’s love of writing and words and there are also paintings of fruit and flowers, some of which came from Sue’s own garden. The beautiful portraits by Ihtesham Hassan immediately caught her attention  and seven of his miniature paintings can be seen in the collection.

A great many of the artists belong to one or more art societies and the initials are identified separately at the foot of this page. Artists who have ‘Winner of the RMS Memorial Bowl’, have received this award from the Royal Miniature Society in the annual exhibition of the year stated, for one specific painting. 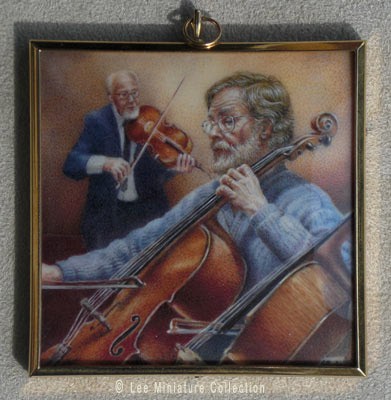 Sue was born in Devon, the daughter of a nurseryman who grew roses as well as fruit and vegetables. She was devoted to her father, who sadly died when she was just ten. Sue and her brother were sent to the Masonic School in Rickmansworth, after which she went on to become a student at Bart's Medical School in London.

One of her fellow students at that time said of Sue, 'She stood out as being passionate about everything she did. Passion was the engine, perhaps the fuel that I think drove most of what Sue did throughout her life. Even as a student she was proud of her roots in Devon and extolled the virtues of exploring Dartmoor, high above the activities more commonly shared by people her age'.

Sue eventually gave up her medical studies and took up a career in publishing in London, working as a medical illustrator. From a very few small paintings of butterflies which survived her casual attitude to her own skill, it is evident that illustrating must have been an ideal vehicle for her ability, and that she would in fact have made a highly talented miniaturist.

Sue loved classical music and made the most of her years in London. Queuing for tickets for Covent Garden became a regular part of her life. Part of her creativity was channelled into making patchwork quilts which became more and more complex and intricate, and even three dimensional. She was also passionate about amateur theatre, and spent many hours painting scenery and making complicated props and costumes, assisting at student productions even after she herself had left Barts.

Sue married in 1974, and once her two sons were born she devoted her energy to their upbringing and education. She taught them herself, including the fundamentals of music, without herself being able to play an instrument.

In order to further their musical education she moved to Wells where the two boys could attend the Cathedral School. It was also where her love of plants and gardens could be allowed to flourish in the very large garden which became her living palette. She created a 'Time Trail of Roses' - over a thousand rose bushes all in date order of when they appeared in this country. These were joined by a hundred different varieties of snowdrop, as well as pinks, lilies and apple trees, all extensively researched, and for many years her garden was open to the public.

Sue's first introduction to miniature art came when she chanced upon an exhibition at the Burwood Gallery in Wells. It was one of several group exhibitions of miniatures immediately preceding the formation of the Hilliard Society. To begin with she would buy one or two each year at the Society's Annual Exhibition but in later years she also attended the exhibitions of the Royal Miniature Society, the Society of Limners and the Llewellyn Alexander Gallery in London. She also commissioned artists to paint her flowers, snowdrops, apples and even all the great composers whose music she loved. (Example shown - Skadi Becker 'For You').

When her eyesight became progressively worse, she continued to buy miniatures, holding them close to her face in order to see them. It seems unlikely that anyone could buy twenty or thirty paintings at a time, as she did, and still value them, but she remembered every painting, had reason for every one that she owned and when she could no longer see them, a simple description from another person would bring them instantly to her mind.
One of her frequent comments to her sons as they were growing up was 'we do not do mediocrity'. Sue made the most of everything that life had to offer and leaves us a wonderful legacy of just one of her 'magnificent obsessions'.

(Many thanks to her sons, Jon and Peter, and Sue's college friend Jolyon Oxley for their permission to included much of the material here).